Benji's Story: Benji was found abandoned and unclaimed within a council pound. Ex-owner didn't reclaim. Rescue Remedies offered a Rescue place saving his life. Benji is now neutered, chipped, and fully vaccinated. Benji also has had his tail amputated as it was causing him concern in the kennels and the damage wasn't healing. Benji is in boarding kennels near Gatwick whilst awaiting his new family.

Please support our work and help our long stay dogs: Our minimum adoption donation is £200. This supports our continuing rescue work and is non-refundable. We exist solely due to the goodwill and donations of our supporters and volunteers. Our dogs need supportive families who will offer them patience, time and tolerance whilst they settle in their new homes. Our Rescue offers all our dogs back-up for life.

Benji's progress through our Rescue is below.
We work with our dogs, who often reveal a different picture and positive skills as they build trust.
Original Referral information: 5.3.21: Hi Lynne

Any space for this boy? Assessment shows he has not had the training or stimulation he needs. Photograph to follow

Benji came into our Rescue on the 5th March 2021
Top

Benji is a typical springer, lively, busy, lots of energy. He is a friendly boy who needs an active life.

I met Benji for the first time today and he really is a wonderful chap. He was neutered only a couple of days ago and seems a bit overwhelmed with his new surroundings. He was initially very nervous in the kennel, bless him, and was less interested in treats than furtively checking me out by running in and out of his bed area, but I managed to coax him out with some gentle enticement. Before I knew it, he'd planted his backside on me which was a positive sign that we were going to be good mates. Outside the kennel he was incredibly interested to sniff around and found the forest fascinating. He's fairly strong, but is great at going in the general direction you want with a few trail-sniffing detours along the way. He was excellent with passing dogs and waited patiently by my side as they passed. He was also very patient and sat quietly with Mon while I rearranged his leads when we got a bit tangled up. I can't believe it will take long for someone to snap him up. He really is a super dog. 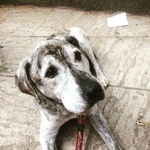 Benji had a couple of days break with us and he really is a lovely boy, full of energy and interested in everything.

When he first came home it took a while to settle, lots of walking around in circles and panting. We let him adjust in his own time and have a free wander. He discovered one of the soft toys and took a shine to that carrying it around with him all the time. During the first night he was on the bed but didn’t stop moving, walking around, ruffling the blankets to create a den and generally fidgeting. I took him in the garden a couple of times and he eventually did lie down. The next night we tried him in the other room and he settled much better and slept through the night.

He can be very strong on the lead, and really enjoys being out sniffing everything and taking in all the new sights and sounds, passes and greets dogs well. He does tend to walk in circles a bit which is interesting with 2 leads as they get easily intertwined but he keeps moving and is very responsive to his name.

He is very comical, we let him have one of the duvets and on the sofa he is constantly rearranging it, getting to a point when he can snuggle his nose inside and then falls asleep with it in his mouth, normally with his soft toy next to him.

He’s a lovely boy and has been good with the girls (9 & 11) and enjoys a good cuddle. He is full of energy and enthusiasm so would be good with an active family and is house trained and knows basic commands, sit and lie down and am sure would be receptive to learning more. The only slight growl was when he managed to get hold of a pair of headphones and didn’t want to give them back, but we managed to do a trade.

Benji came to visit us again this weekend and certainly livened us all up. He would need a while to settle in as when he has been with us he really doesn’t stop moving and is alert to every noise and as soon as someone gets up he is ready to follow and circle them causing a bit of a trip hazard

On walks he is very strong on the lead so would need some help with that and is prone to going in circles which can be interesting with 2 leads and can mean you get in a bit of a tangle. He is interested in anything and everything, very excited and keen to join in. He keeps an eye on the birds, squirrels and passing dogs and would dearly love to chase so you need to hold on tight.

When he does sit still he likes a cuddle and is prone to giving you a wet face, he also likes his cuddly toys picking them up and carrying them round the house. He also likes making himself a den with duvets burying his face in to go to sleep.

Benji would suit an active family who can keep his mind stimulated and give him plenty of exercise, though I am not sure it would ever be possible to wear him out

He is a friendly energetic boy who would thrive once settled, I hope his home comes soon
Top

I met Benji this morning for the first time. Benji is very strong on the lead and has a very keen interest in the birds and squirrels, so that with mixed with mud was interesting! We went to the paddock where Benji had a great time, he wasn’t interested in the ball just loved having a good run!

Benji showed off his lying down on command

Benji and myself had a great time in the paddock today. He loves to run, run, run.

I found out that he understands the commands 'down' and 'heel' and he walked quite nicely next to me -for a little bit, there were just too many other exciting things to see and do. He is truly a handsome and affectionate boy

I met Benji for the first time yesterday. He is a lively, happy springer boy. We went to the paddock first to burn off some of that energy. I got some lovely cuddles and kisses letting me know that we were firm friends!

We then headed for a little walk as I know he likes to spin a bit as he walks, which is just total joy and excitement to just get going! He is a strong boy.

We then visited the paddock again for more fun. He showed me how bright he was doing the agility slalom. He must be bright to do this as I am no good at agility stuff. He really enjoyed this and it would be great if he found a forever home that would work on his obviously, natural ability!

After that we headed for another walk and he was much calmer on the lead. I think he has had some training in the past as I am sure he understood the command heel.

I am lazy so spingers are not my natural choice of dog but Benji is great fun to be with. I was totally smitten by the end of our time together! Excuse all of the videos but they each show different aspects of his fab personality!

Benji and I have been getting to know each other over the last few weeks and on Saturday I think we started to have a little breakthrough. Benji is a lovely, super friendly lad but he does have the biggest abundance of energy I think I have ever seen and unfortunately the noise and stress of kennels in not helping this sensitive boy. However, on Saturday, whilst getting him to the paddock was as usual somewhat challenging due to Benji's pulling and spinning ( he finds the woods overstimulating with all the smells and sounds, squirrels etc.) once we arrived I saw a big difference in our Benji who instead of just constantly running round the paddock perimeter ignoring me, instead actively engaged with me with and wanted to spend most of his time having lovely cuddles interspersed with quick laps round the paddock before coming back for more cuddles. Benji does love to be close to you, he snuggles right in and loves you to put your arms around him and rub his tummy and chest. He also decided to show how amazingly he can walk to heal and he happily trotted up and down the paddock with me, right by my side totally focused on me and waiting for me to tell him what I wanted him to do next. This engagement from Benji was unexpected but made my heart sing as it proved how much Benji just wants to please the lucky humans who home him and also how much he wants to learn. Benji is super, super bright and I believe will really love and thrive from training in whatever form his new home choose be it scent work, agility, general training etc.

After a nice long stint in the paddock Benji and I headed out for a nice walk. Once out of the woods Benji really settled down and did his best to not get too excited and showed me how well he could walk to heal.

Benji is a wonderful boy who will need an active household and experience with occupying a working breed dog. If you think you can offer Benji the home he deserves then he is ready to worm his way into your heart as he has mine