Arthur is our Americian Bulldog Dog of the Month for October[ /size]
Arthur's Story: Arthur was found abandoned and unclaimed within a Northern council pound. Rescue Remedies offered a Rescue place saving his life. Arthur is neutered, chipped, and fully vaccinated. Arthur is in boarding kennels near Gatwick whilst awaiting his new family. 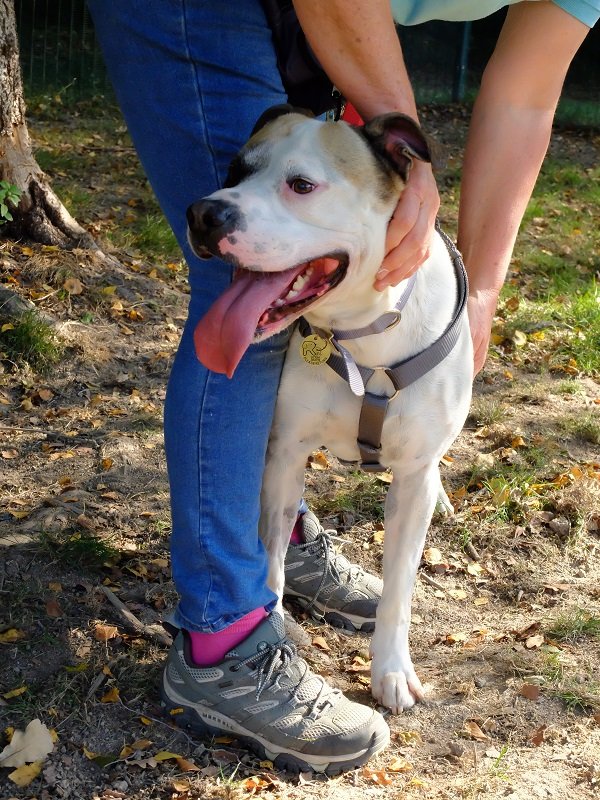 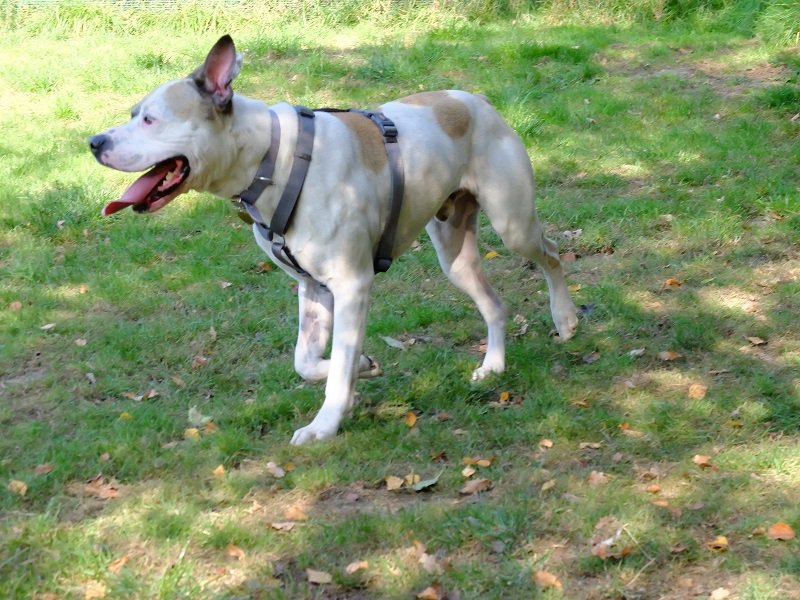 Arthur's progress through our Rescue is below.
We work with our dogs, who often reveal a different picture and positive skills as they build trust.
Original Referral information: Hi Lynne I hope you are well. I need some help with this lad who was in Sheffield Pound. He went to a good rescue but has proved to be too much for them. He seems not to have seen life and although fine in kennels and with people he is very reactive to traffic and strange situations, jumping up and yesterday actually caught and bruised a volunteer. The Rescue don't feel they can rehome him and asked if I knew a very experienced rescue that might help him and give him a chance. Arthur has had an awful life. 7 years old, chipped, vaccinated and neutered. Not the easiest dog but can you help at all? Margaretxx 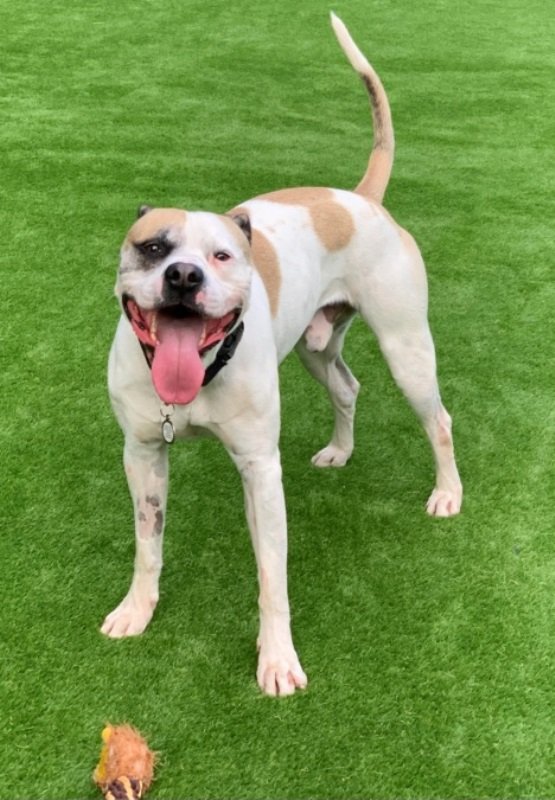 Looking forward to meeting you Arthur!
Would you like to walk our lovely dogs too?
Dog walking volunteer form
Top

Mel and I were lucky to meet Arthur and spend some time with him in the paddock yesterday. He is a friendly lad who loves people. He likes to lean against you and enjoy fuss and strokes. Arthur is happy and lively, with energy to burn. He can jump up at you for attention and needs to learn to be calmer around people as he would likely knock over a small person with his enthusiasm. After 15 minutes in the paddock he definitely started to calm down and would then run over to Mel and I with much more controlled energy, keeping his paws on the ground and either leaning against our legs or rolling over for tummy rubs. Arthur needs space to run, plenty of walks and consistent handling to understand that he gets more attention from people when he is calm. He is a fabulous character with the biggest of smiles. 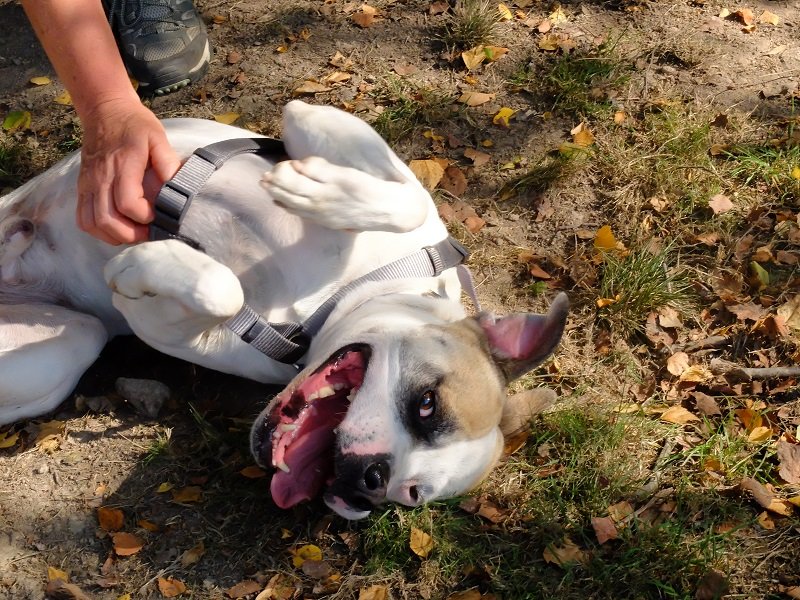 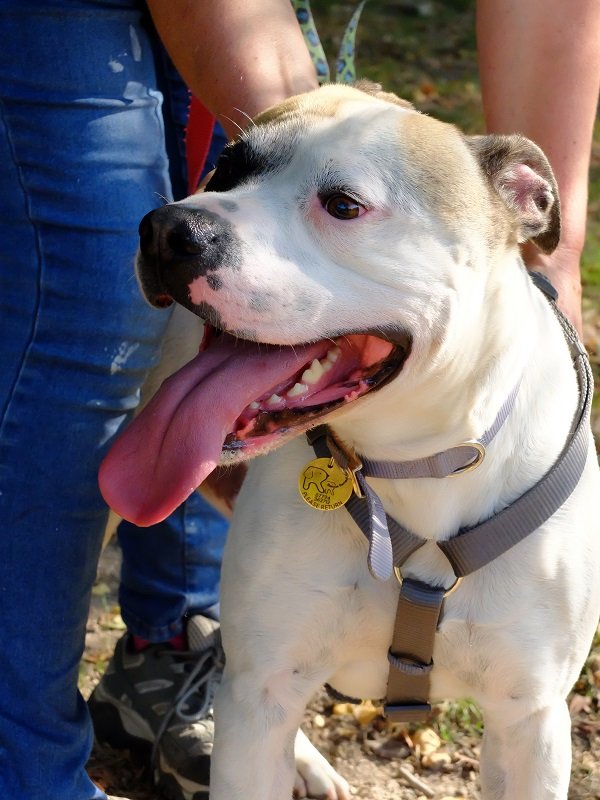 What a fabulous dog. I met and walked Arthur today. I entered his kennel with treats, knelt down, and although we had never met, I was his instant friend!!
He was not interested in treats, just wanted strokes and cuddles. He really wants affection, and deserves it.
We went for a long walk and he behaved beautifully. He was interested in every sight, sound and smell. Some gentle pulling, but when told to stop he did. We met 3 sets of dogs, and he was interested in them all, but in a friendly way. He had a lovely splash in the stream, and was a joyous boy.
First impressions are that he is very intelligent and loving.
Top

Luke took the wonderful Arthur out on the weekend. He is a very friendly lad although there was a bit of lead grabbing at the start if the walk.
Once he got over that we had a lovely walk around the common and Arthur was very well behaved.
On the way back we passed a couple of other RR dogs who stood aside for us but were barking at him. Arthur seemed to find this overwhelming and by the 2nd telling off he started grabbing the leads again.
He did settle back down again but seems to need a bit more exposure to daily life to adjust and settle.
Gorgeous looking boy

Arthur was an absolute star today. He is still restless and desperate for company but he has settled right down with the lead grabbing.

I got the full works today including the face wash and plenty of jumping up for attention. The jumping up was playful and Arthur was looking for quality 121 time. He was great today and I've enjoyed being with him since he arrived.

I like to sit a while after our walk and let him come over for a fuss. He's a lovely boy and a great companion. He does pull for the 1st 15mins then calms down a bit. I wouldn't call him strong, just a little boisterous. Theres no harm in him though and he has quickly learnt how to leave the leads alone.

A short video of him in the paddock. He was so happy to be out and about and kept asking for more attention. I couldn't take a video of the previous 10 mins cuddle time because he had his tongue in my face

I made a boob getting him out of the kennel. I was adjusting his harness and then remembered I should have shut the neighbouring dog in. By this time he was excited to get out with the harness still undone. Finally got the harness on and got out but by now he was stressed and started ragging the leads

Apart from that he walked very well. He does pull until he's tired then settles down. We finished in the paddock for some 121 time. Later in the afternoon I couldnt resist taking him out again. This time with the correct routine all went smoothly. He needs to be with someone does Arthur. Hopefully in the near future he'll get the chance to be a fine friend for someone.
Top

I walked Arthur twice this week, Tuesday and Wednesday.
Both times Arthur was a peach and is very affection loving a cuddle in his kennel.
Arthur walks in chain leads whilst he grows in confidence, is a little strong but does back off after 10ish minutes.
We walked along the road and with each car that passed Arthur showed Interest as if to say “hey are you my people?”, no aggression or lunging just curiosity that made me sad that no one has come for him and opened their car for him to jump into.
Whilst out we met a gentlemen with his on lead spaniel, we gave way and stood in the bushes whilst they passed. No noise or move from Arthur, as we walked away, Arthur did a little dance, a move towards a lead grab but no contact was made and barks to me which I responded with “yes, you were a good boy” because he was and made me considered he’s just unexposed to other canines.
I have a real soft spot for Arthur who is very skinning and a bit stressed in kennels. Again he’s very affectionate.
I was surprised to see Arthur is 7, he definitely seems younger and slightly immature, I think maybe he has been sheltered. It’s nothing consistent training wouldn’t solve as he’s very intelligent.
Come on Arthur’s home

he most definitely was listening to April and just relishing his time out from kennels, lovely boy who is doing amazing and so ready for the next chapter in his life