I took Kieran for a lovely stroll and dip in the stream yesterday. Kieran is just a stunning lad, he so good when you enter his kennel and just wants a fuss and attention. When out walking he is generally very good on lead although he does have a high prey drive and is always on alert for squirrels and will pull if he thinks they are close enough to get. He listens though and clams back back if you tell him. Because of his drive though I personally don’t think he will be able to live with cats.

Kieran is just such a fun happy chap and will make a great addition to any home. 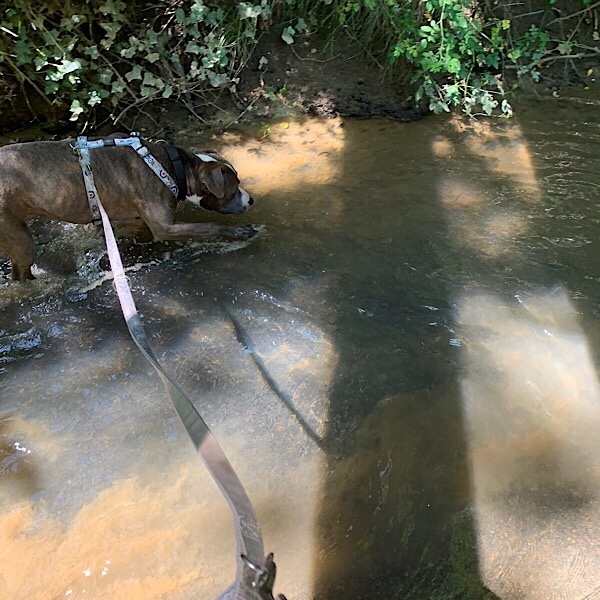 Cooling off in the stream.

Lovely walk with Keiran this week.

Kieran is a lovely boy and I was very happy to be his walker on Saturday. He welcome you in his kennel and calmly sits whilst you get him ready. He was great on hi lead, doesn’t pull, unless he sees a squirrel and loves a little dip in the stream. He truly is a stunning glad and hopefully will not be with us long. 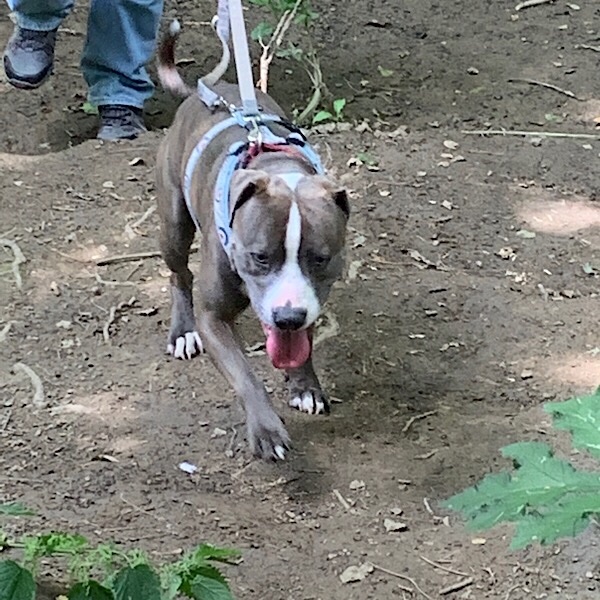 And now I’m ready to carry on 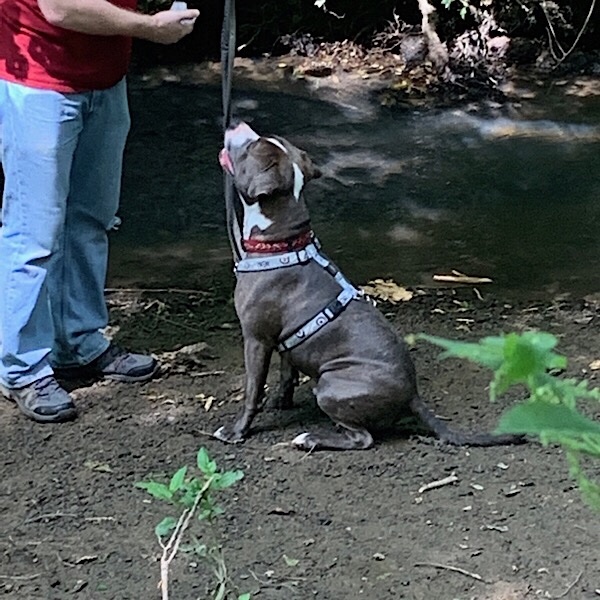 Ok I’ll be a good boy and sit 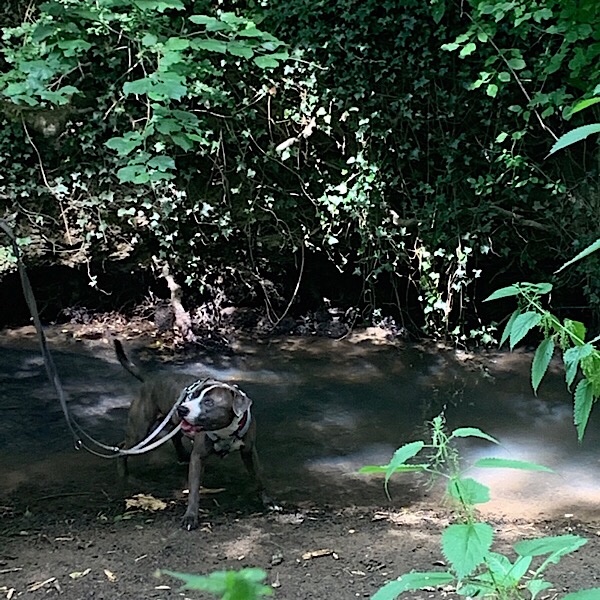 Ooh is that sausage Rob

Yes Kieran has come to stay for a bit! Very hot day today to be doing anything really but he behaved well in the car and exploring the new area. Went to the nearby pier for a walk this afternoon and Kieran enjoyed watching the water and boats for a bit before we moved on. Very relaxed and playful in the home and showcases his perfect sit and paw for treats. Right now we are both crashed out, it’s been a busy day, will walk again this evening when it’s cooler. Many pics and updates to come

I had a lovely walk with Kieron today. Not only is he a stunning boy, he is happy to walk along the river and keep me company.
I was warmly welcomed in Kieron’s kennel and we started out earnestly for a walk in the sun. Kieron listens well to his walkers and I’ve no doubt that Kieron is a firm favourite with all of us at the kennels. He sits nicely for treats and we had a lovely time walking along the steam cooling off nicely.
I think that Kieron will make a fantastic addition to the right home and time and patience will ensure he becomes a loyal and loving companion.
I really hope that special someone is out there for him soon. He deserves to be part of a loving home that will win his confidence and allow him to flourish

A vid of when I walked Keiran last week. Such a good boy!

Kieran is doing so well in foster. He is generally very calm and loves chilling out in different positions/ spots. Not a fan of sun bathing, prefers the shade. Very nosey and inquisitive and loves following me or my son around the house and laying near. Cautiously I have introduced him to a few members of my family and friends by bringing them home, and he has been the most excited welcoming and friendly dog. He settles after about two minutes and is back to calm. He has met other on lead dogs on our walks greeting them with nose touch calmly, and greets other people in the same manner happy for the strokes and attention. We have a recall lead now so he feels like he is getting off lead time at the park which he loves! We have tried to do some running together but Kieran doesn’t know jogging, it’s either walk or sprint for your life! He does have a funny personality and you can literally see him thinking about things and sometimes trying to challenge instructions given if it doesn’t suit him

. For example if Kieran is sent to ‘bed’ but he wants to lay on the floor by the sofa close to you he will look at his bed, look at you then settle halfway between the bed and his chosen spot, then a couple minutes later move back to the spot he wanted!! However with a little persistence/ encouragement he listens and follows instructions perfectly. So if I say ‘bed’ I will not let him settle anywhere but the bed! He responds really well to treat training with great eye contact and understanding. He is playful sometimes (about 30mins a day) prancing around like a pony and bringing you his toys. His recall at the park is ok, it depends if he is distracted or not so we will work on this and just generally giving him the reassurance he needs to settle his nerves in new situations, and control his excitement when someone new visits or when being affectionate. Will upload some pics later from my laptop. Love this boy 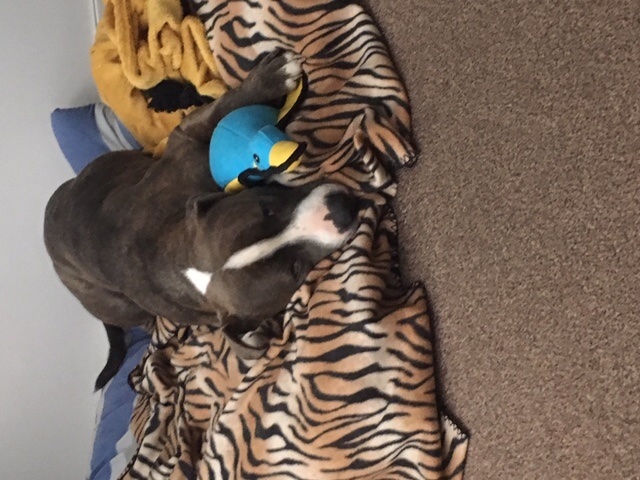 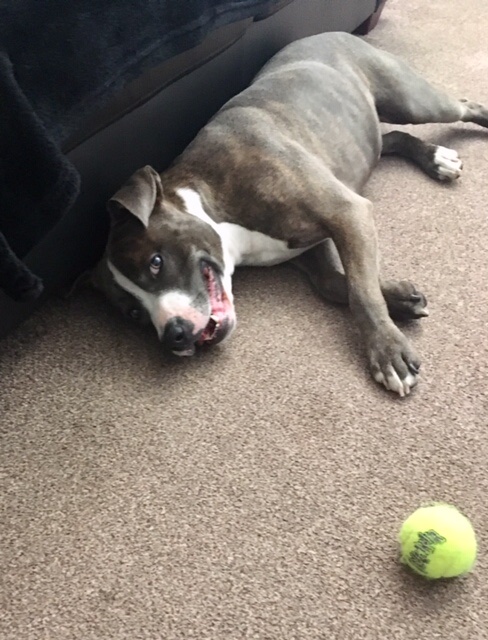 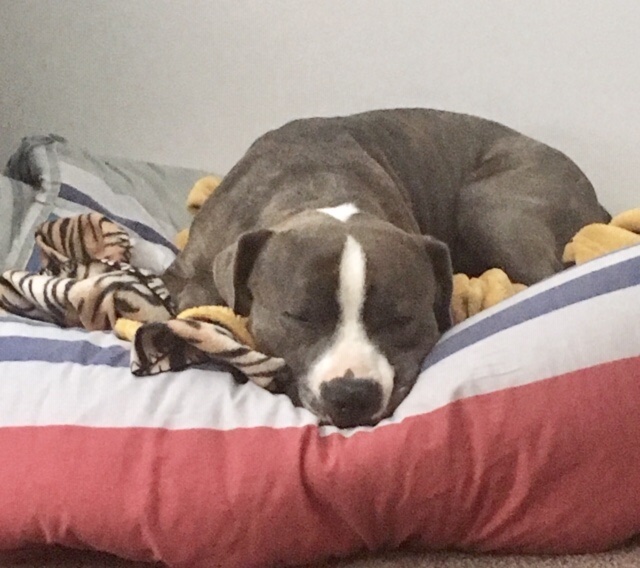 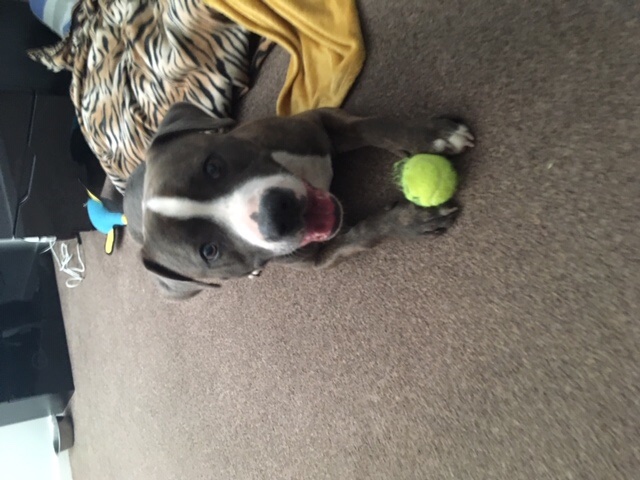 Kieran really enjoys fetch at the park, he goes all bouncy and smiley and super responsive. His recall, even when he is at the full length of the 15 metre lead, is really good and he runs back excitedly to greet me, no treats needed just plenty of ‘good boys’!