Hooch goes out with Claire for his early morning break. When I arrive I usually meet them in the lane and Hooch rushes over for cuddles. 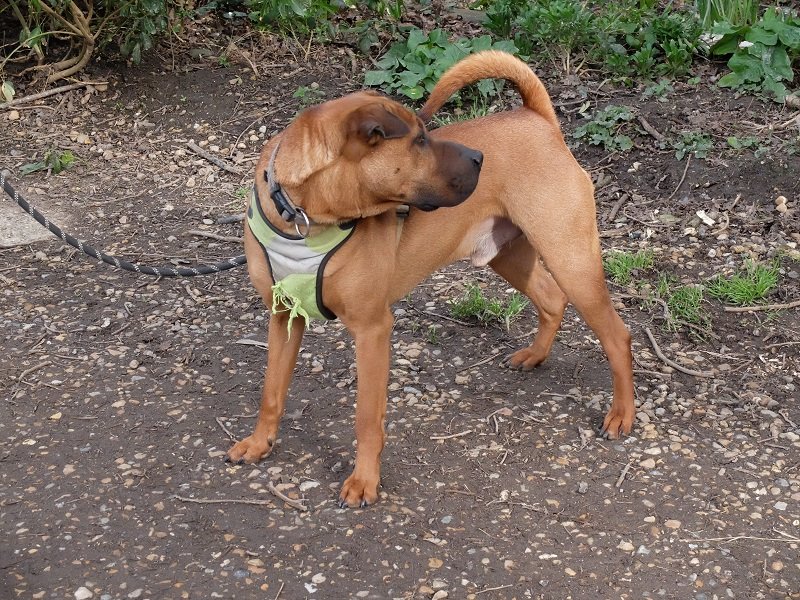 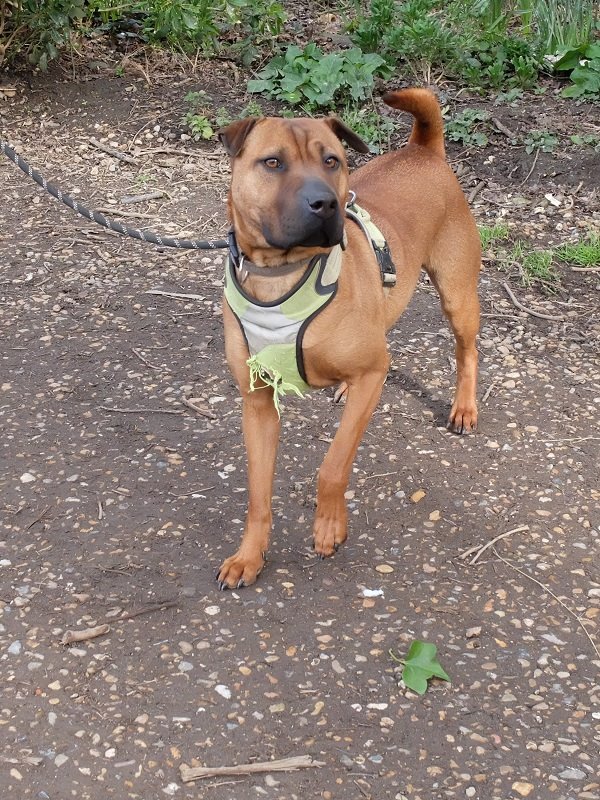 I took hoochy out for a wee break and we passed barking dogs, large noisy lorries thundering past, we saw workmen, and hooch was so well behaved, he was perfect, he didn't flinch one bit. I love him so much.
Top

We walked Hooch yesterday (18 April) and he was great! Always so eager to go for a walk, loves to sniff every little bit :-). When he saw another dog passing by, he sometimes dropped himself to the ground, but was OK to be encouraged to move away. We walked him quite a few times before but yesterday for the first time he went on his back and loved being stroked on his tummy and face. He almost fell asleep like that! Such a sweet boy! 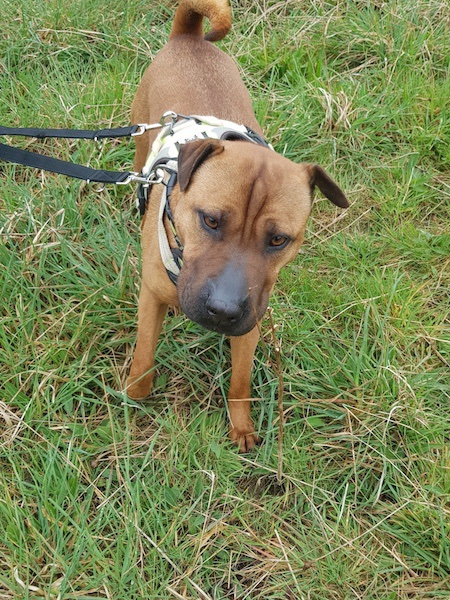 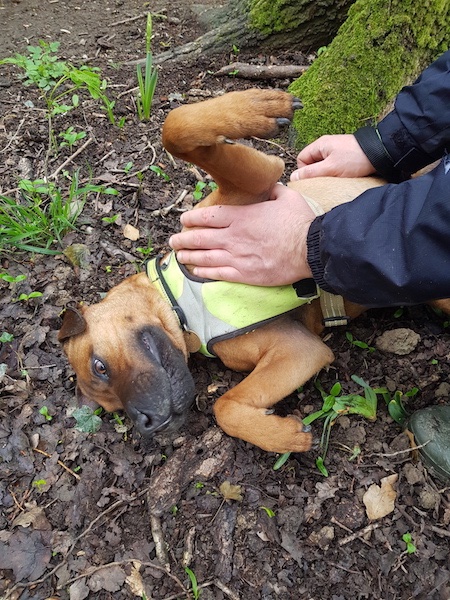 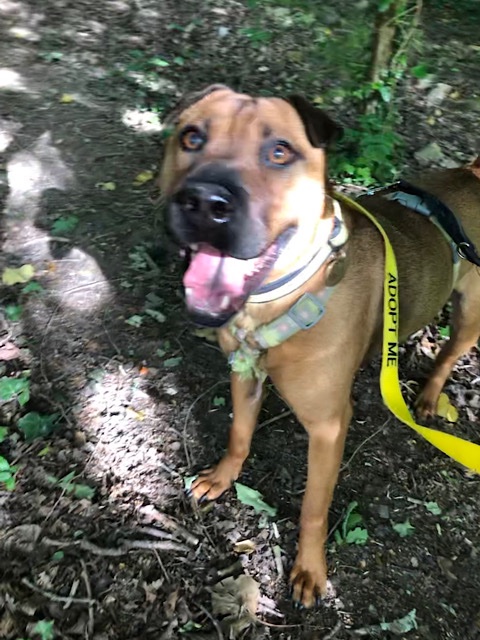 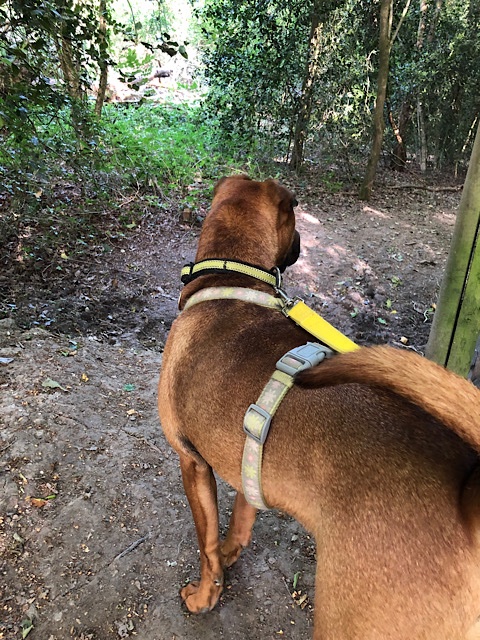 And he got to sample all the luscious grasses too, made him very happy 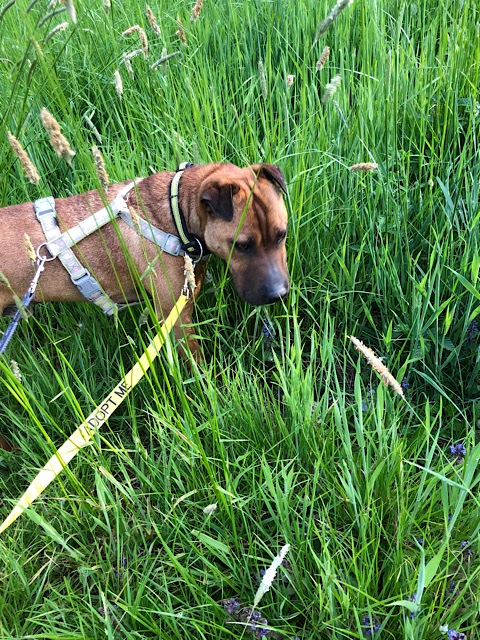 I took Hooch out for a walk today. He’s lovely to walk and settled into a gentle pace very quickly. We were rushed at by three barking Pekingese dogs that surrounded us and Hooch merely sat and ignored them. He’s always been great when meeting other dogs on his walks with me. As usual he used his delaying tactics as we approached the kennel and rolled on his back for some belly rubs.

If I arrive early at the kennels I might be lucky enough to be greeted by Hooch with Claire, out for his early morning ablutions. I get an excited greeting and cuddles. This morning he rolled over for tummy rubs. I do get mugged for treats too! 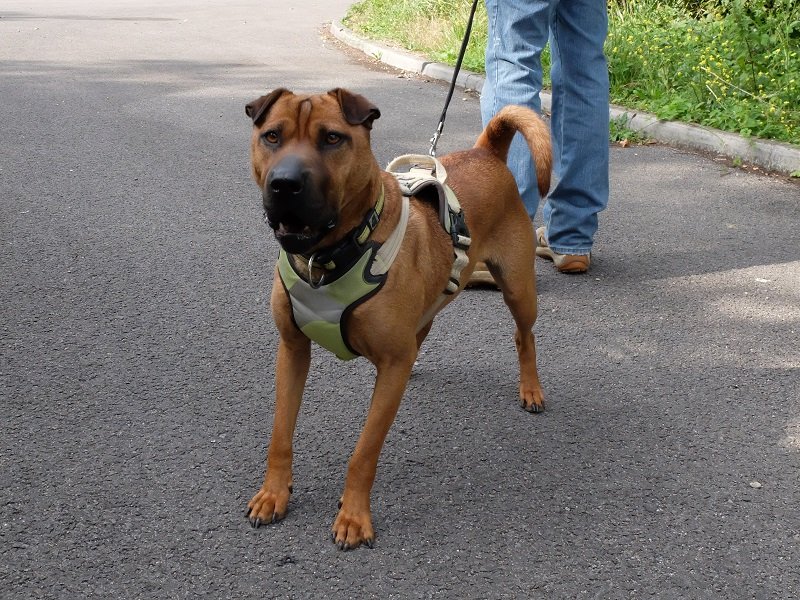 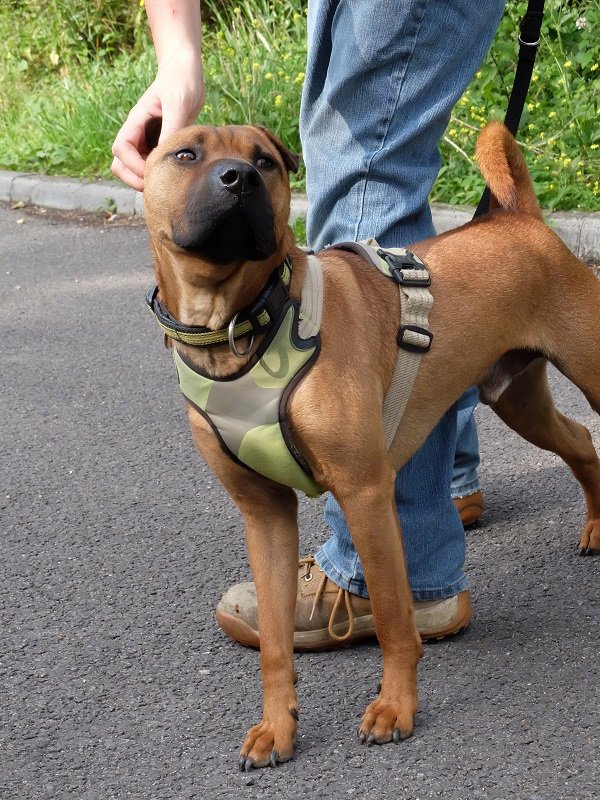 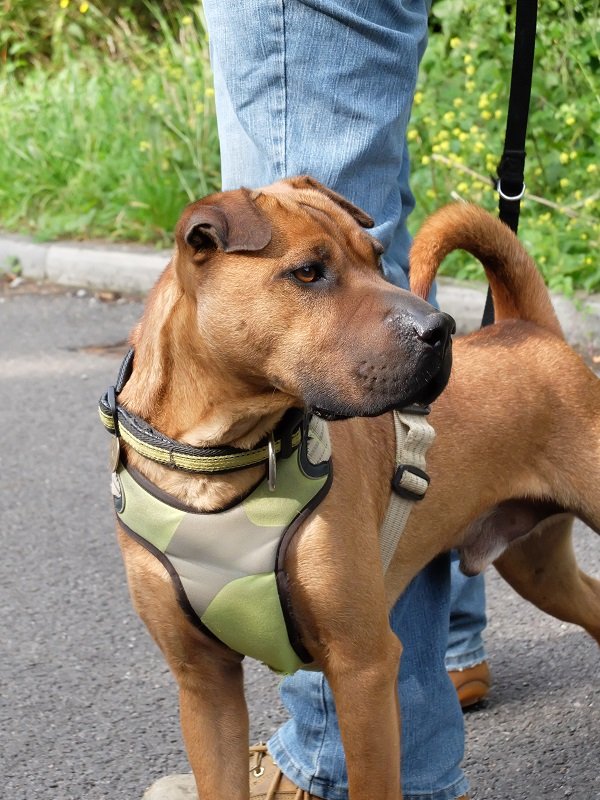 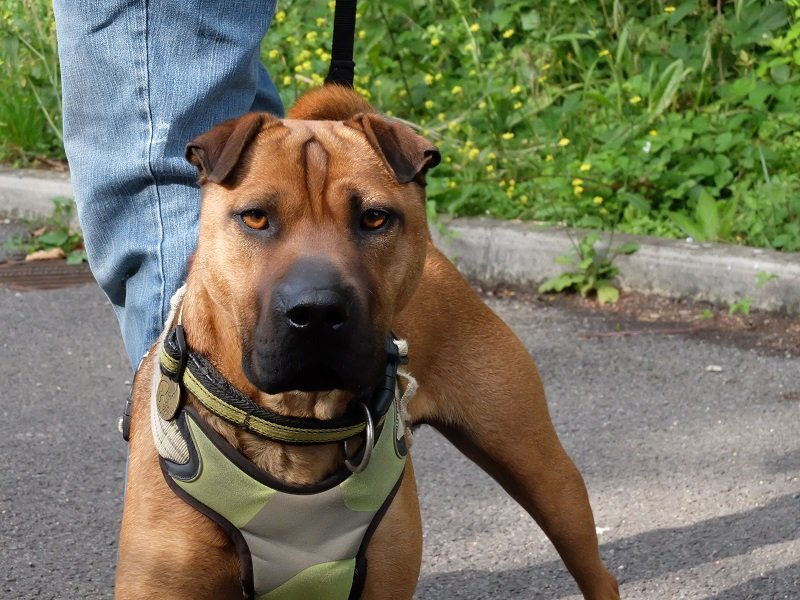 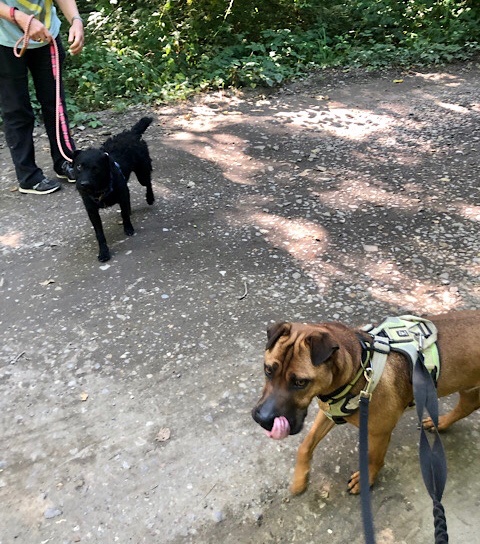 Hooch and Benji enjoyed a walk together today. I think they both liked the company of the other, although they paid each other very little attention. They ignored the cyclists and other people walking past too. Hooch seems to be a chilled out dog. I didn’t know Hooch until recently, but he’s a delight to take out.
Top

Hooch came home to our house for a day. He jumped happily into the back of the car and travelled very well - either lying down or sitting and looking out of the back window.
When we arrived home Hooch, wanted to investigate everywhere. At one point he started playing with (and shredding) the kitchen roll which had been left on a coffee table, but fortunately I managed to save most of it by trading it for a treat. Later he nabbed a piece of toast sitting on a plate while I was out of the room, but when I caught him with his front paws up, sniffing around the kitchen table, he did get down straight away when I told him. Hooch just needs to know the boundaries when he is somewhere new. 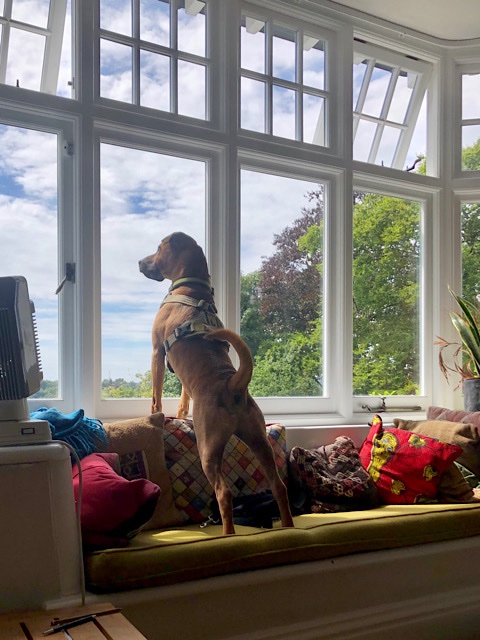 Hooch checking out the view

Hooch showed little interest in the bowl of dog food I put down for him, but he loved the last part of my bacon sandwich when I tried that in his bowl instead. When we went for a walk Hooch was very good at passing people and dogs without any fuss at all.
On our return, Hooch took a rest next to me on the sofa and then on the floor - in fact we both dozed off. 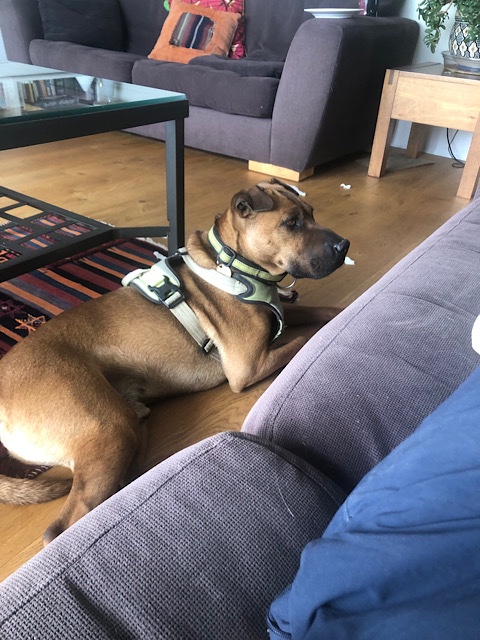 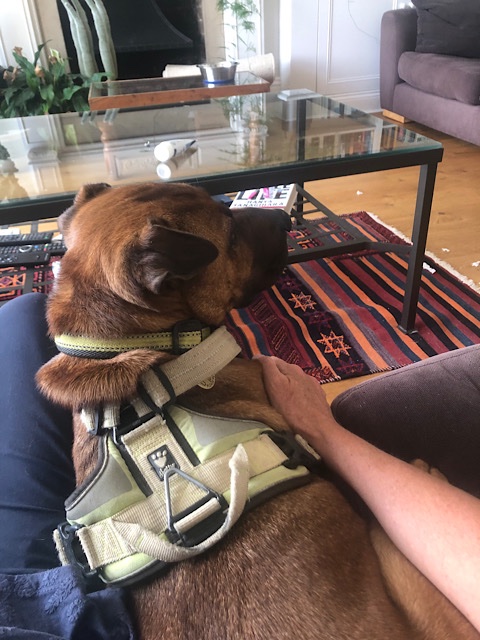 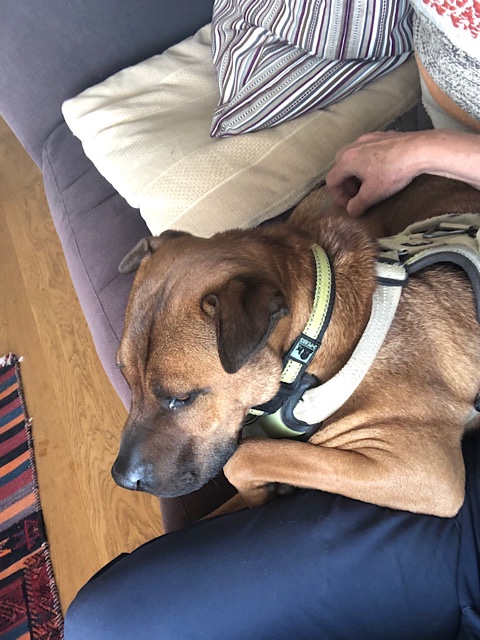 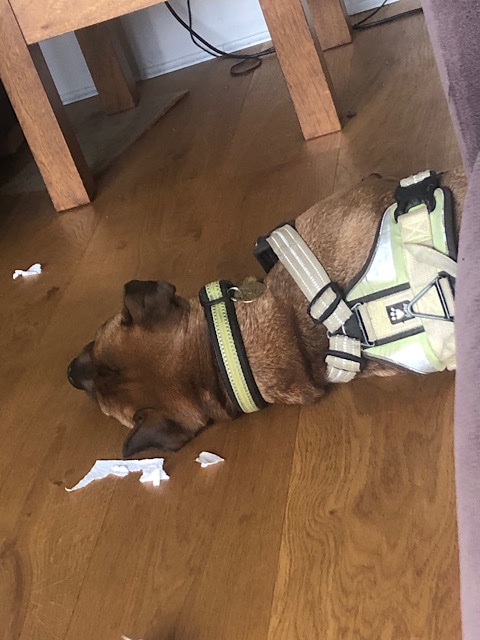 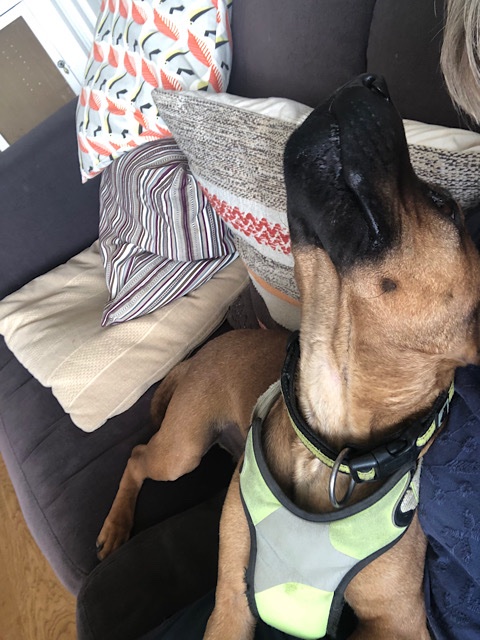 Later he got up and stood quietly facing the living room door, telling me that he was ready for some more exploring, but sadly it was time for us to leave.
Hooch was alert and friendly throughout his stay and he didn't jump up at all throughout the day. He was quiet with no barks. He just needed a little more time to settle and relax into our home, and in just a few hours this process was already underway. My husband told me that thinks he is an extremely homeable dog and I am sure that he will settle well into life outside kennels. 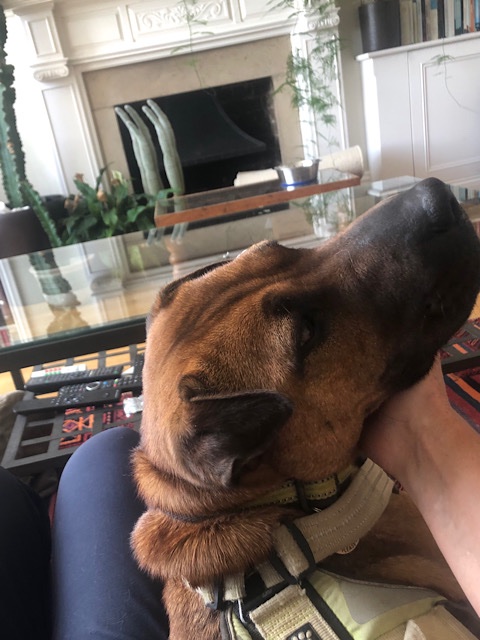 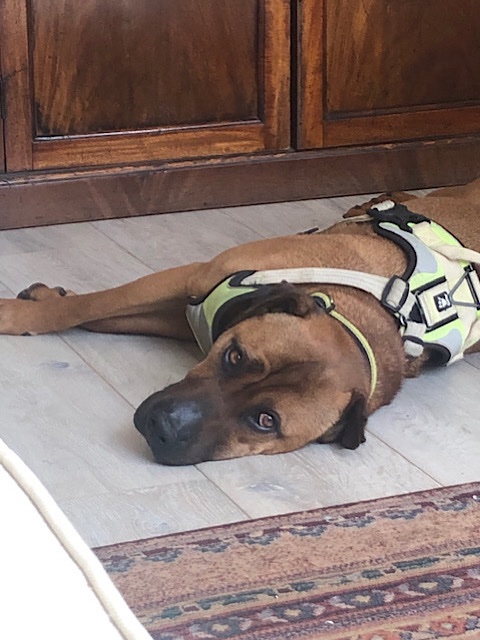 Hooch has come for a weekend break to London. Once again he was brilliant on the car journey. He lay down and we didn't hear a sound from him until we arrived.
Hooch was a bit wary of our first walk in a busy London park, but is now really enjoying them. He ignored the ducks snd the geese and was brilliant with all the people and dogs. 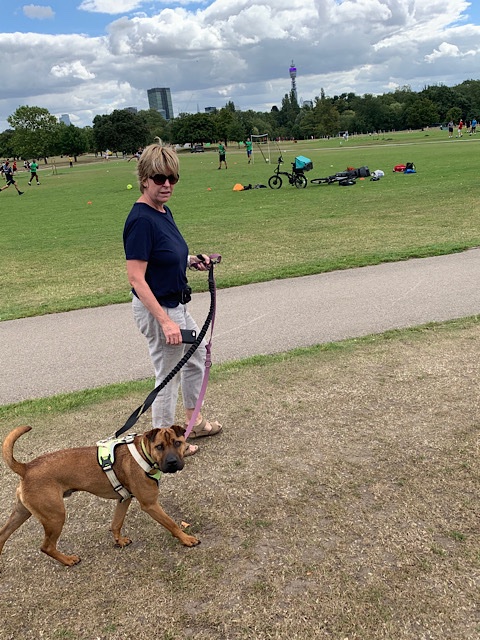 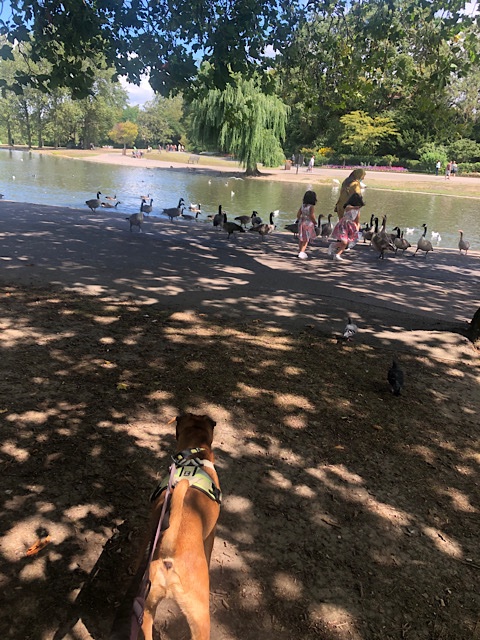 He was also really good walking on the pavement and crossing roads. He rarely pulls and ignores the traffic and stopped and waited patiently at traffic lights. 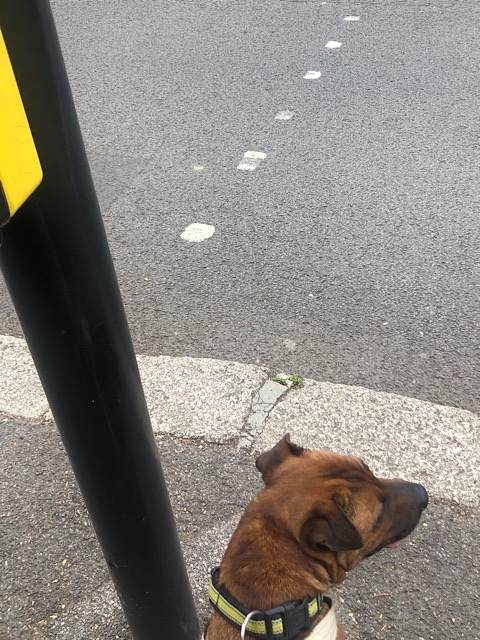 We were able to eat our TV dinner on our laps without being pestered - Hooch just lay on the floor. 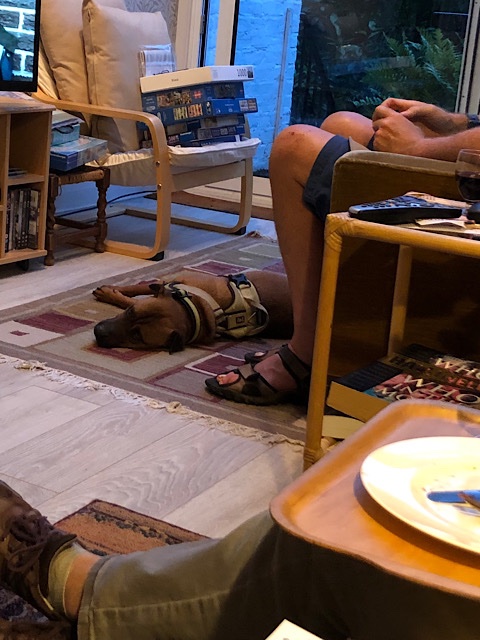 Soft furnishings (especially cushions) and my Dad's slippers have had to be hidden for now - as he wants to chew on them/toss them around and is reluctant to give them up without a high value trade.
In spite of briefly trying to remove the duvet from the bed, Hooch quickly settled as soon as the light went off and he chose to sleep on the floor rather than the dog bed - or our bed, but he did join us in the morning for a snooze. 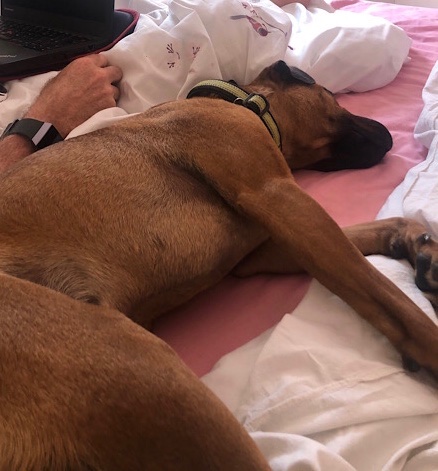 For a dog that has spent so long in kennels Hooch has adapted remarkably well and has charmed everyone. He has his excitable moments (usually involving soft furnishings or slippers) but has otherwise been a lovely companion. He's not a dog that eats his food with great relish so I treated him to chicken and rice which he wolfed down. He's now flat out on the floor at my Mum's feet. 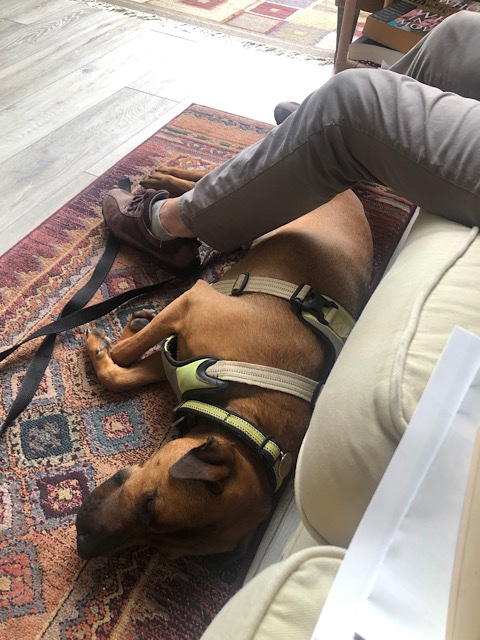