Lovely homing... Buzz will gradually unfold.. he is a delicate flower Thank you
Top

Have a happy and loving life BUZZY!!!

It was amazing to meet you and go on many fabby walks,

Enjoy your new pawrents Buzz, You truly deserve it!! 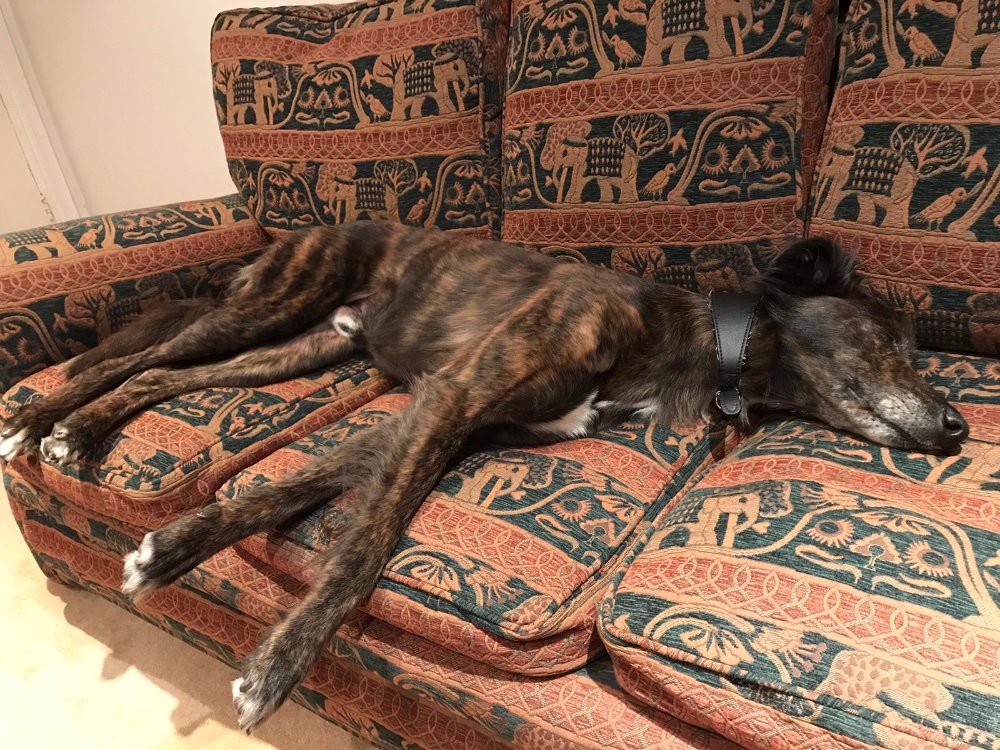 Buzz is beginning to relax in his new home and we're all learning lots about one another.
Top

Okay so it's been a week since Buzz came to live with us and we've come a long way after a very grim first night when nobody slept much!
On his daily walks Buzz is alternately placid and feisty but luckily he meets with some wonderfully understanding dog-walkers who are helping with his socialisation. This is one of the most amazing things about dog ownership - you will make friends and your dog will make friends too. It takes time and patience.
In the house Buzz has some new chew toys and we're working on his manners. After his walks he's spent a lot of time vegging out on the sofa watching the Ashes this week and it's probably just as well that he doesn't properly understand cricket (yet). He sees a ball being thrown, hit away and retrieved - awesome!
After school he gets to play with Cat, his best friend, and he was a complete hero when we confronted a fox at close quarters!
Check in for more on Buzz's progress next week.
Top

Thank you Buzz's Family. We anticipated he needed dedication and commitment ... you have given him that in spades...so much appreciated
Top

Great to hear Buzz is settling in and he's getting all the right love and support he needs!
Top

This week we've been lucky enough to share Buzz's walks with another dog walker. So, whilst by no means relaxed, his walks are a bit more social. Buzz is getting daily opportunities to watch the world go by - joggers, cyclists, other dogs, etc. - always on a short lead and with either Henry or myself soothing him. He's made some good progress in walking nicely near traffic but we're on guard every moment outside the house.
Buzz has met his new vet who says there is some evidence of an injury to one of his hind legs, and poor Buzz does tend to drag his toes from time to time. He does love a good speedy turn in the garden, however, and will play with a football, or one of his tugger toys quite joyfully. It's a real pleasure to see him in these moments.
The vet also said Buzz could do with gaining a little weight so we've increased his food slightly. Rather unfortunately for us as his housemates, Buzz has taken some independent action on his diet and discovered a taste for the pears dropping into our garden from a neighbour's tree. We've discovered these bullet-hard pears left on the sofa and some pungent farts have increased our efforts to remove these awful temptations before Buzz gets hold of them.
Inside the house, Buzz loves a cuddle and now has a favourite chair. If you tried to sit on this chair, Buzz would beat you to it. He's also pretty swift at getting to the sofa just before you do, too! After some initial clumsiness on stairs, he's now reasonably able to go up and down without too much drama. We're working on him not getting in the way when anyone's trying to tie up shoe laces or pack a bag or dish up his meals - all this will come with time and patience. These two weeks since Buzz came to live with us have flown by. He's definitely settling in as part of the family.
Top

Lovely update. ..with time and patience im sure this lovely boy will blossom

Buzz is lucky to have you! I think there's a bit of collie in him so he should be a quick learner

Week 3's been tough. Last Sunday a cycling event in the park seriously set Buzz back and it's taken most of the week, a new harness and tremendous patience to get him out of the house at all. The new harness has a grab handle which means we can limit more effectively any attempts he makes to jump or lunge at any of his triggers (cyclists, joggers, vans, other dogs...). It's also more padded, less strappy and pink, which he seems to like.
This setback has coincided with a change indoors too. Buzz has become very clingy and is close on our heels whenever we make a move which is obviously a bit inconvenient!
Fingers crossed we can overcome these hiccups.
On the plus side, Buzz loves playing 'Magic Ball' in the garden and gets lots of exercise from it. The magic rests in the fact that there is NO BALL - Buzz dashes off in pursuit of a ball we've pretended to throw, hunts around a bit, decides it's lost forever, comes back and chases the next Magic Ball! Occasionally we throw a real ball and he brings it back looking absolutely thrilled.
Top
Post Reply
52 posts