I managed to get to walk Zippy again this week. He was first walk of the day and we set off with Tommy. No trying to stop today, he was more than happy to follow along after Tommy who also enjoys company on his walks.
We met Chrissy and Bolt at the top of the lane so they joined us and we all went for a nice long walk along the footpath, past the stream and then back down through the woods with Zippy bringing up the rear and then going out in front.
He was admired by a group of ladies out on their walk and showed them how friendly he is by putting up with strokes and compliments

I really must try to get Zippy to walk again with another dog. That would have been difficult yesterday as there were so few walkers. Zippy does need to get out - for different sniffs and to stretch those legs. Yesterday we enjoyed some time in the paddock but then he got very silly about the other dogs in the pens near the paddock so I took him back to his pen. Kennel care has taken its toll and he is very dog reactive. It would be great for him to find the right home.
Top

As I left the kennels this evening Zippy was in his basked, looking subdued, and was not interested in the treats I offered him. He and I had enjoyed our usual bit of time in the paddock and then a brief meander round the kennel grounds. He has been in kennel care for most of his life and needs his own home. He wears the muzzle because kennel care has taken its toll and he is dog reactive but other than that Zippy is an affectionate, loving little soul.

I fell in love with Zippy from the first time I met him. I am stunned he has not found his forever home as he is a cracking boy. He is also very soppy and loves cuddles and a good run around in the paddock. As Helen has said in the previous post he has spent most of his life in kennels and has done remarkablly well considering.

I hope this little dude gets spotted for the treasure he is and gets to really live a forever home life.

Thank you for that lovely little video Sarah which shows how very affectionate Zippy is. All he wants is to be loved and cuddled and shown affection. Kennels are not the place for him as he is now dog reactive and because of this he has to wear a muzzle when he is out of his pen around other dogs.

Zippy came home with me for the day yesterday. A year or so ago I used to bring him home for the occasional day when my cats were not in the house. Zippy is not for cats. 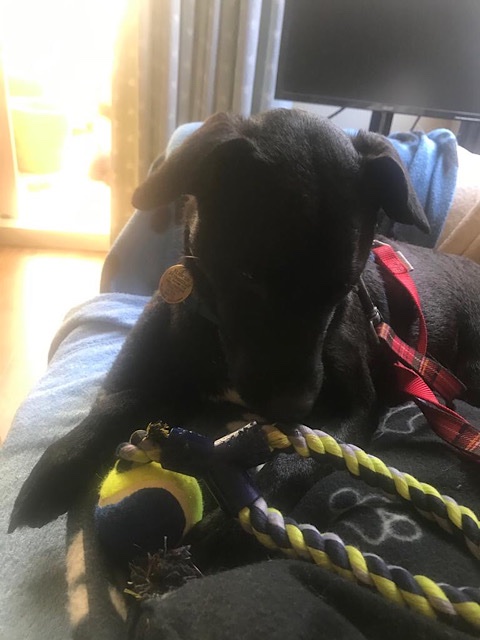 Zippy travels well in the car and snuggled down in the back seat after I had whisked his muzzle off. He seemed to remember the house and didn't do any of the mad zooming around he used to do. Instead, he found the basket of toys and played with all the balls - he even found balls I had lost ages ago. 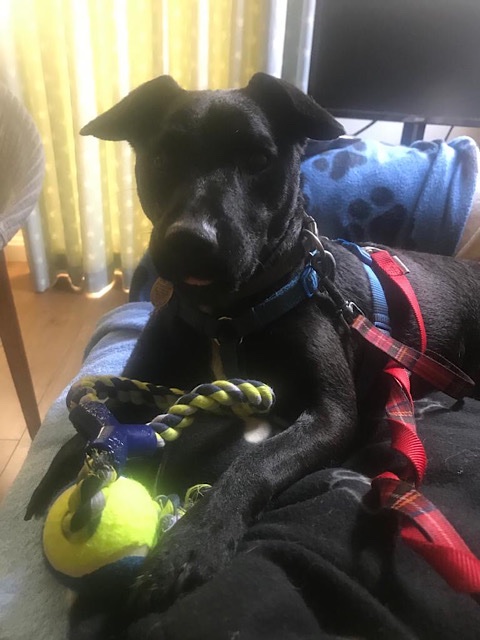 Zippy was subdued initially and slightly on edge. It takes a while for dogs to unpack - often months - so he was not going to relax immediately and, of course, he knew he would be going back to the kennels. Zippy is a very intelligent, intuitive little dog. 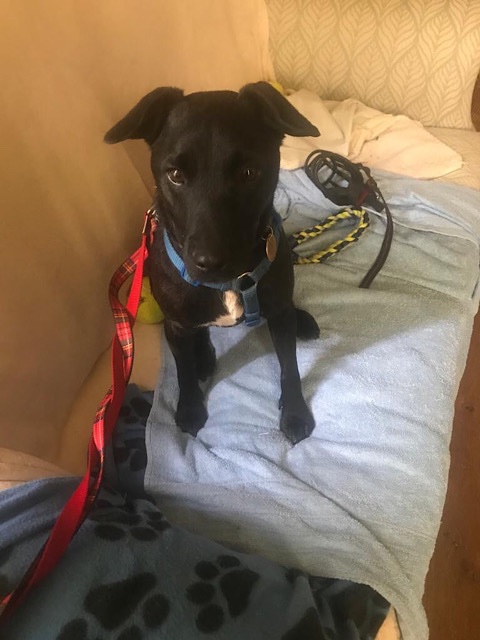 He ate his breakfast and we went for a short walk. Zippy does not like to walk far these days. It was not possible for me to let him off the lead as I am not 100% sure the garden is dog proofed and with RR dogs we are all very, very careful. So he stayed by me for most of the day - he was my little shadow following me about everywhere. 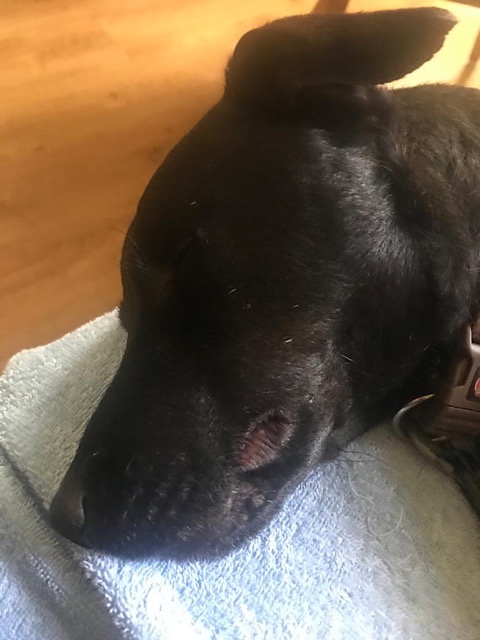 Zippy is a friendly boy - he responds well to people and usually will jump onto any lap that is free. He would not be for young children/toddlers but I think would love the company of older children. He is definitely a people dog.

After a while he snuggled down by me, with me stroking him, and every time I stopped he put out his little paw to ask me to continue. 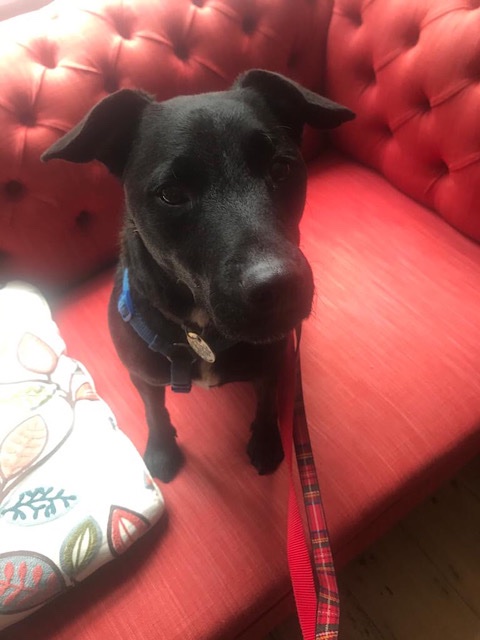 Zippy came into kennel care in 2017 at the age of 13 months - barely more than a puppy. He has spent his formative years in kennel care with one month's foster break with Sarah where I think he did himself proud. He does need a home and I am sure that home will come. His needs are specific. The rescue would want him to go to a patterdale experienced family, with a 6 foot fence in the garden and otherwise safe too, managed exits to the house, no other dog nor a cat nor small children. He wears a muzzle when out and about. That is no problem. I think he could be desensitized to other dogs over time - always being safe and cautious and doing things slowly. He must never, ever be let off lead nor allowed to escape from anywhere. Zippy must be kept safe - he is a well loved little dog at the kennels by those who know him.

I reluctantly took him back to the kennels. I think we had both enjoyed our day but my cats were returning and so Zippy couldn't stay any longer.

litte Zippy. I am sure your home is on the horizon somewhere and you are not destined to spend the rest of your life in kennel care. 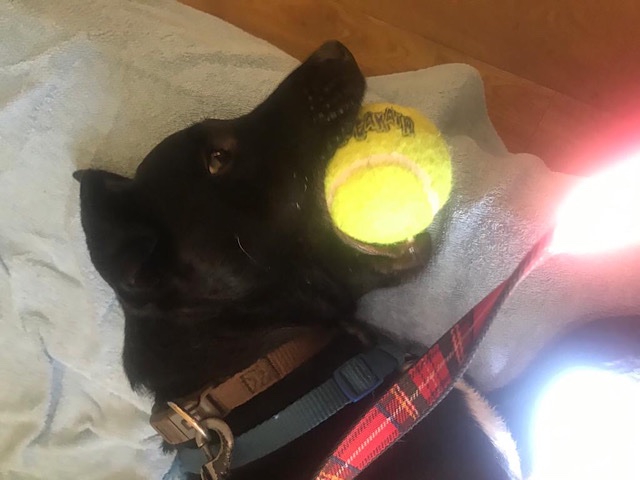 Wonderful update Helen. So glad Zippy got a day out. You explain so well his homing needs. He really is an easy boy to look after and would make a great companion. I tend to walk the bigger dogs but Zippy is without doubt my all time favourite terrier!!!

He is another video from our time in the paddock.

Click here to learn how to add YouTube Videos to your phpBB forum
Would you like to walk our lovely dogs too?
Dog walking volunteer form
Top

What lovely photos and write up of Zippy, Sarah and Helen. Zippy was a bit subdued yesterday, I took him to the paddock with Rona (taster), he was happy just to sniff around and sunbath, he proved himself yet again with his love for people. I did try to walk Zippy, but he was not having any of it, I will have to ask Ros what her secret is.
Top

Hi Elaine, yes Zippy is subdued at the moment - he really does need his own home. He is loved at the kennels but it is not the same. 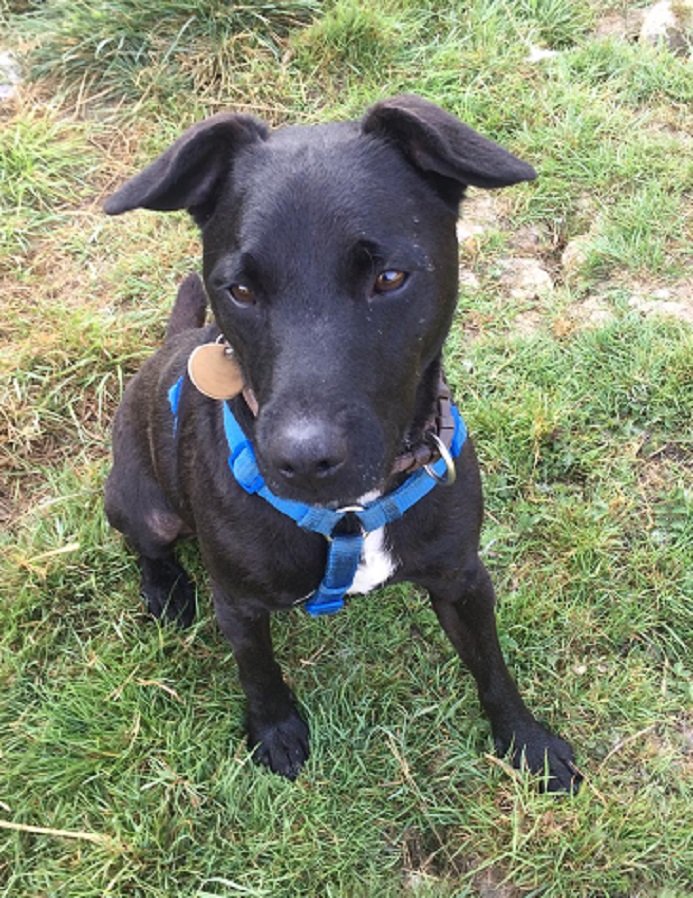 nice to see jans sunday boy in the reserved list