Lissie is a joy.. 200% Jack with keen working instincts and a joy la vie and a tour de force!

Absolutely loving having her here on site. She is busy; lots to say about everything, very alert to anything that 'Russells' or moves.

Lissie had a seriously injury to her front left leg in the past and it is distorted but holds her weight when she wishes:Always however held up when she stands as if to signal her alertness but also lifted in a front skip as she runs around enjoying all that is before her and about her. 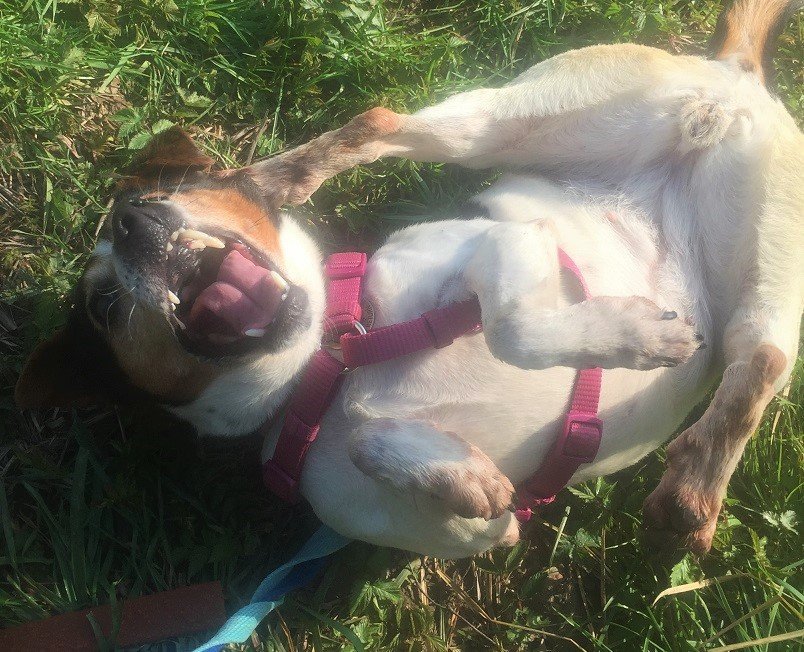 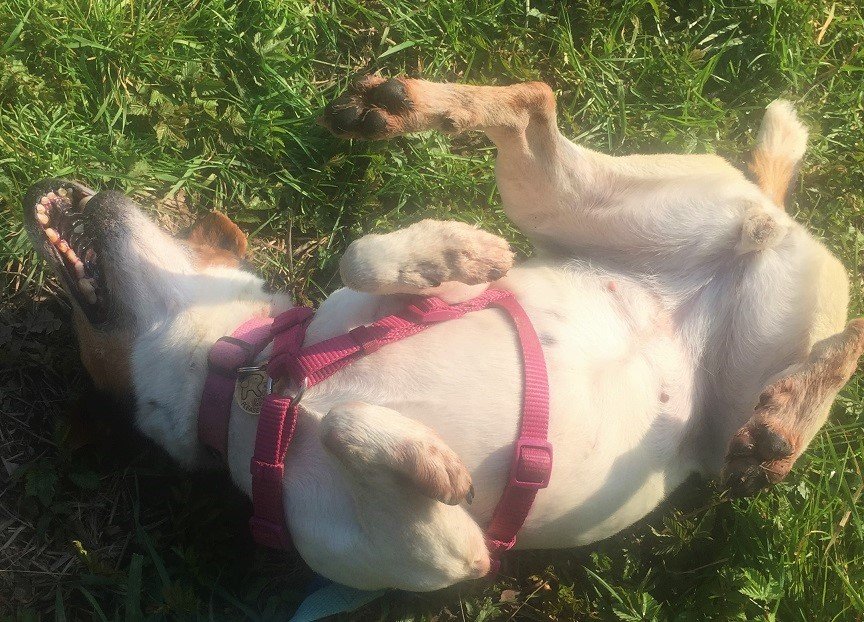 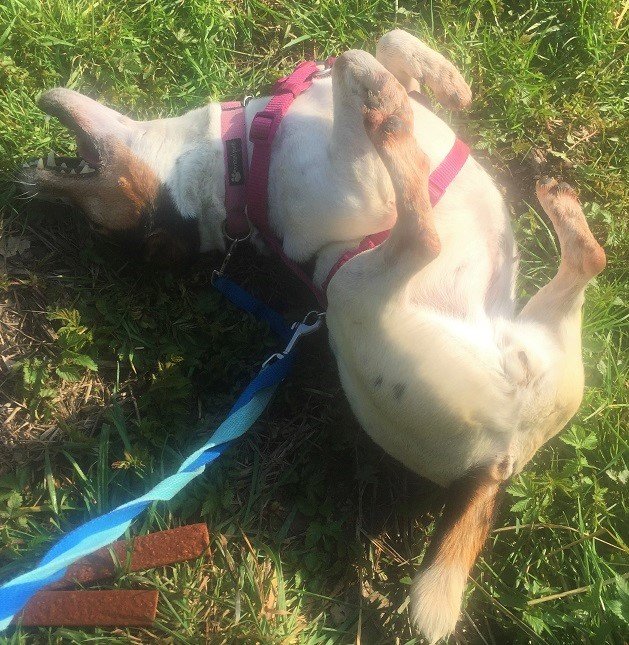 It was an absolute joy to see little Lissie again today and we shared a long walk stopping to smell lots of interesting things and making sure we kept our eye on the squirrels. She is still a bit barky when meeting other dogs but personally I don't feel it is aggressive - more that she is just not sure/confident and so given time she might well improve. 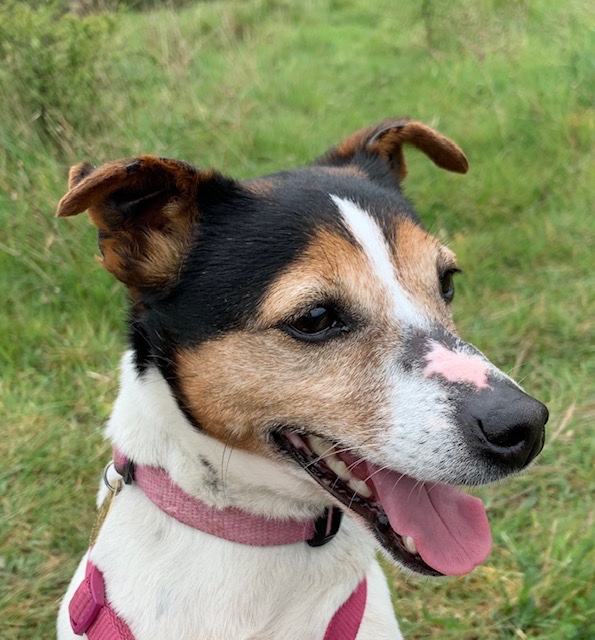 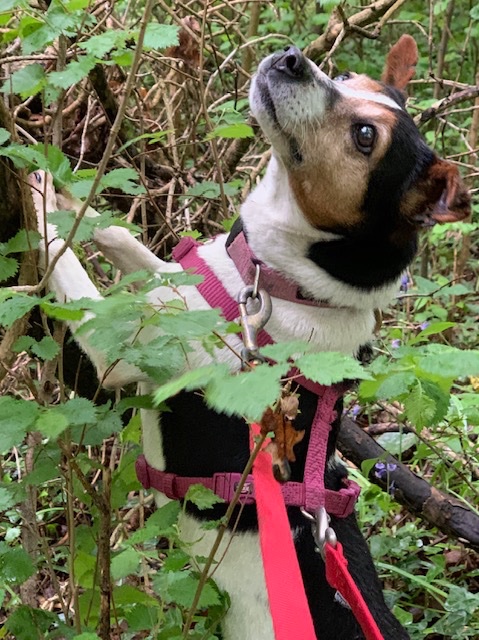 A small JR off the lead ran up to her and she didn't react - I was more concerned so picked her up to avoid any issues - she likes being picked up and certainly doesn't mind being carried over the the muddy sections. Lissie is an absolute joy to walk and to be with as she is so smiley and loving - she will make a great companion for anyone who enjoys that JR big spirit in a small body. I hope you don't wait long little girl xx
Top

I walked lovely lissie today. She was very excited to be going out and enjoyed a roll on the grass before we headed off. She mostly hopped along on 3 legs at first as she was excited and moved faster that way, but it doesn’t seem to bother her. After she calmed down a little she did walk on her other leg too.

Such a super friendly girl and sooooo cute. Very small and bouncy. Loved her. Will definitely walk her again if she is still there next time. 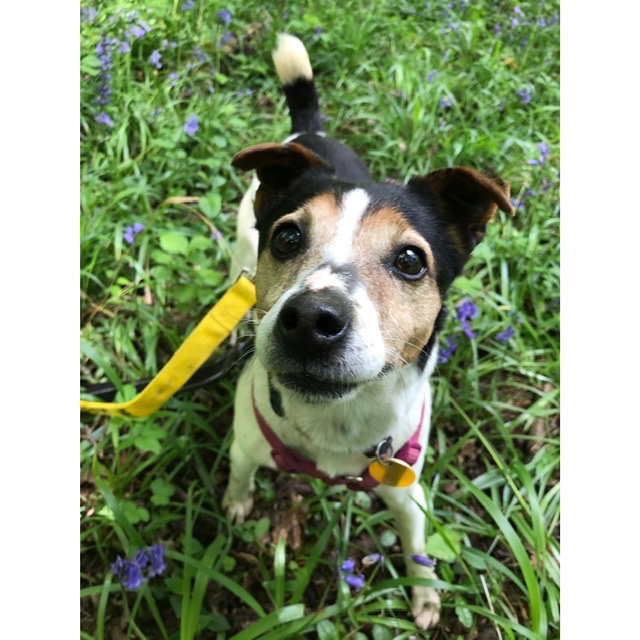 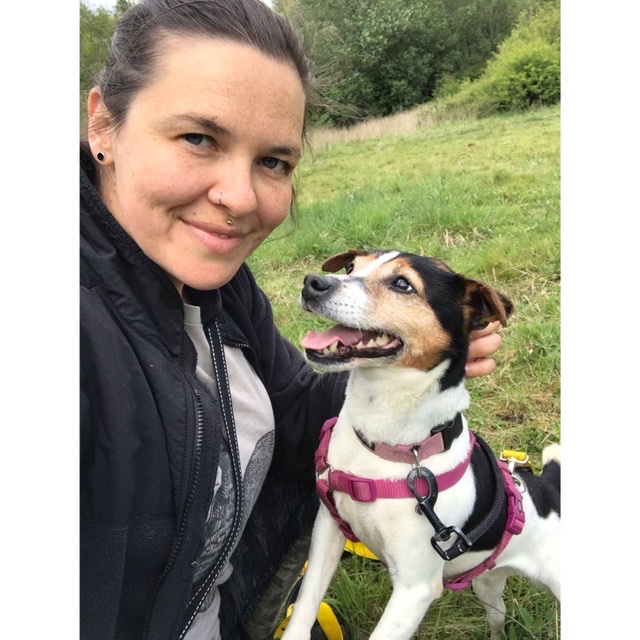 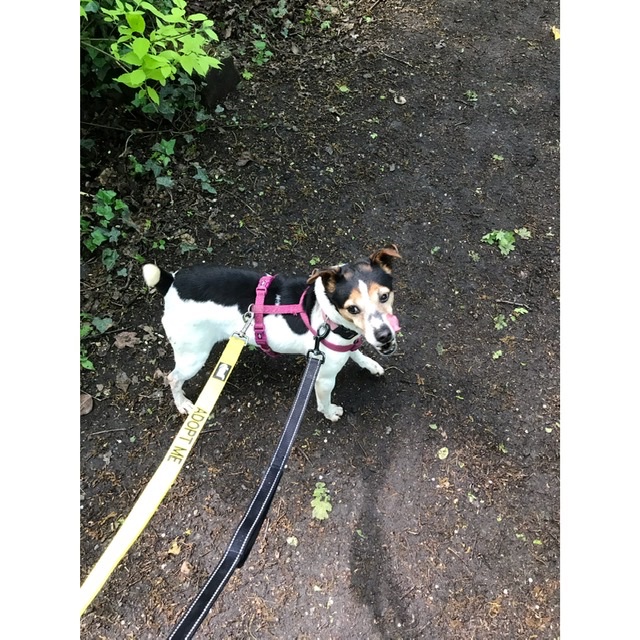 We passed two on-lead dogs and stepped to the side. Lissie did bark at them but she wasn’t that bad and is so small so easy to handle, and once they left she trotted on happily. We also met two off lead German shepherds that came round the corner very suddenly and I think they must have looked like a two headed bear to tiny lissie as they were tied together and both black and very hairy. I quickly turned around and walked the other way and called to the owner to get them, lissie was very good, she didn’t bark just came with me and they were on her tail but she just followed my lead. Although after the owner finally caught hold of them and they were walking away she then did start barking, which I thought was very sensible timing

I just love this little lady whose affection and enthusiasm for life is a real tonic. The wonderful thing is dogs don't have a clue about Coronavirus - this makes it even more special to mentally escape from it all and just enjoy their magical company. I so enjoyed seeing Lissie again this week. She really is a lively little soul but very sensitive at the same time. 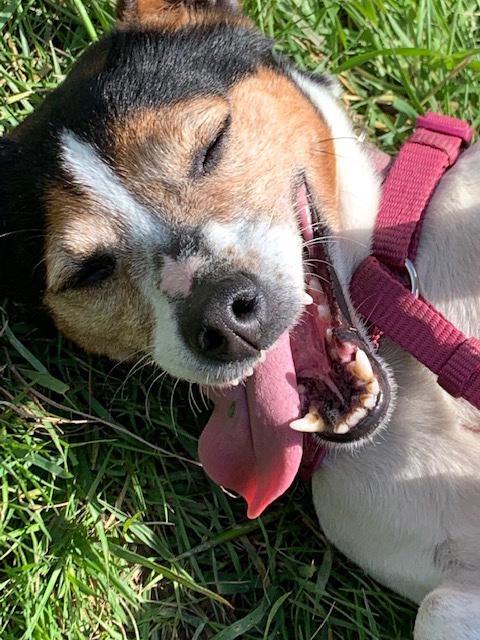 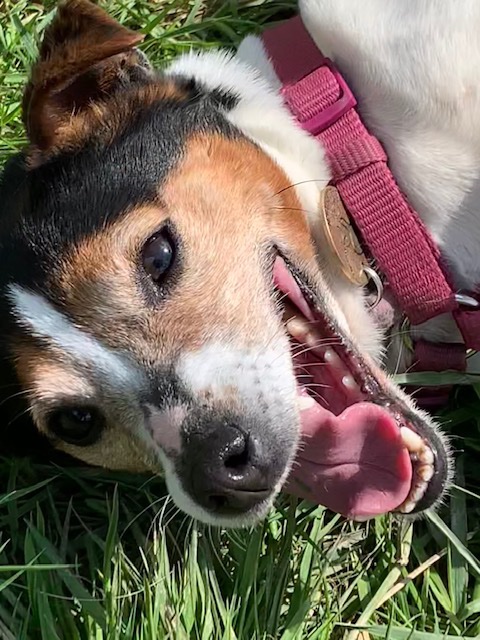 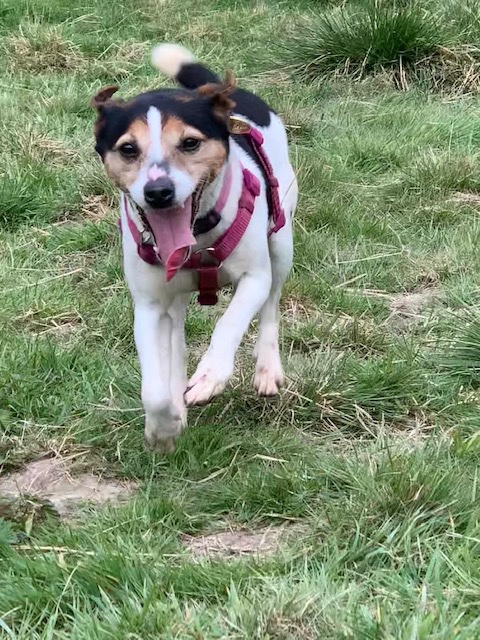 I have noticed that if I pick her up when passing large dogs she doesn't make a sound so I think in time she will hopefully build on her confidence and be able to pass dogs without so much noise while being on the ground. She really will make such a wonderful companion for anyone where she can be the only furry family member. I so hope she doesn't wait long as she really deserves a warm, loving home

Lissie and I had a great walk yesterday. She is a dinky dog with a big but lovely attitude - not so lovely though when she spies another dog! She is just so very friendly and affectionate to the walkers and I find her completely charming and endearing. She loves being outside - and is a great fun terrier to spend a walk with. Her favourite thing is rolling on the grass - and she does this quite often such is her joy of the great outdoors. I'm sure her aversion to other dogs can be managed and Lissie will make someone the perfect little companion. I understand she is not too keen on cats either - just as well as I would be popping her in my rucksack to take home!

What you see is what you get with Lissie - there are no airs and graces. She is a typical little terrier and likes to have the occasional dig beneath a tree if she sees a hole there already. If she sees another dog she will bark and get excited but she is so small that this is seriously no problem. If she sees a squirrel in the woods, and take my word for it they are everywhere, she will bark and want to climb up that tree but that is no problem as we just move on. Her favourite thing is rolling on her back - she just loves the feel of the earth beneath her and she does that frequently. Yesterday we had a couple of walks as Lissie does not like to soil her pen and she was her usual great company. Despite her limp she likes to put her best paw forward and go for quite a long walk - plucky, gorgeous little girl.

We met the lovely Lissie for the first time today and she's such a sweetheart. She seemed to really enjoy her walk, although we stopped plenty of times en route for her customary back rolls in the grass! Lissie was also sensible enough to find a few shady spots to lie down for a little rest in the long grass and escape the sun for a while. Such a sweet girl who loves her cuddles and treats, really hope she finds her forever home soon 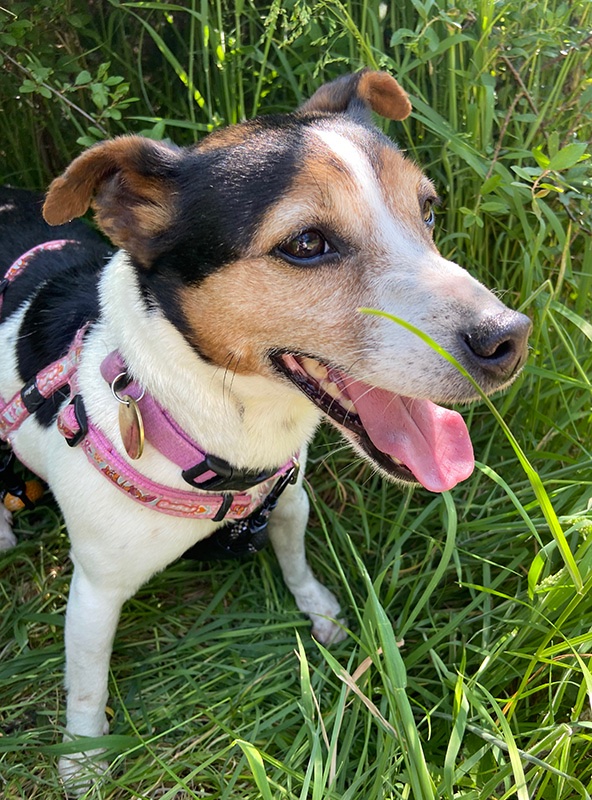 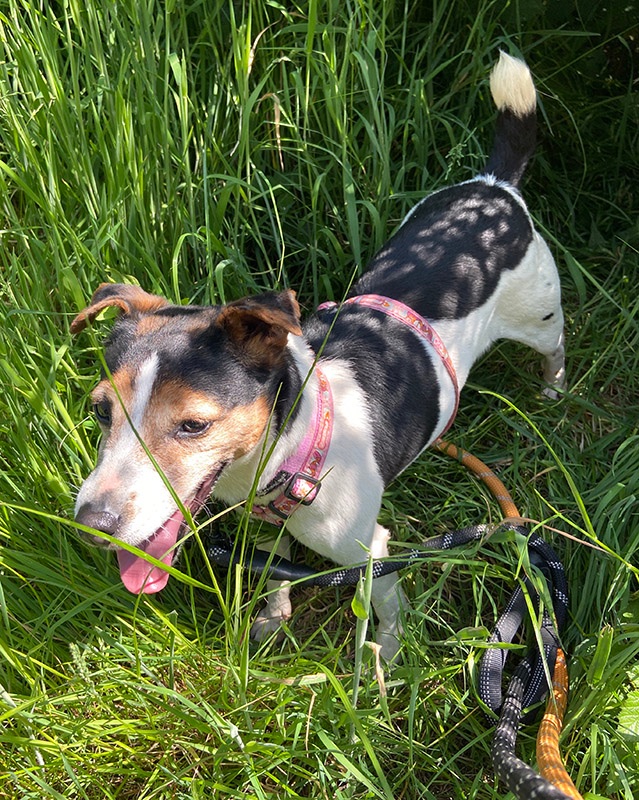 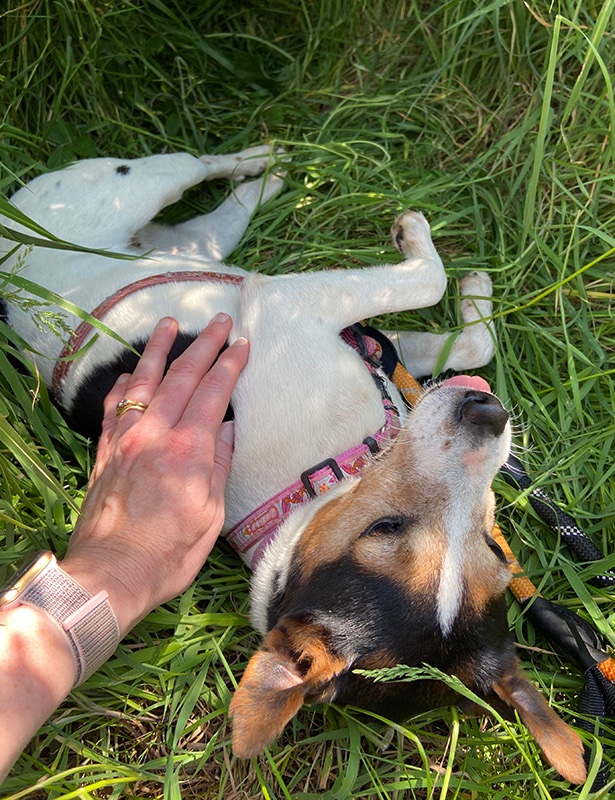 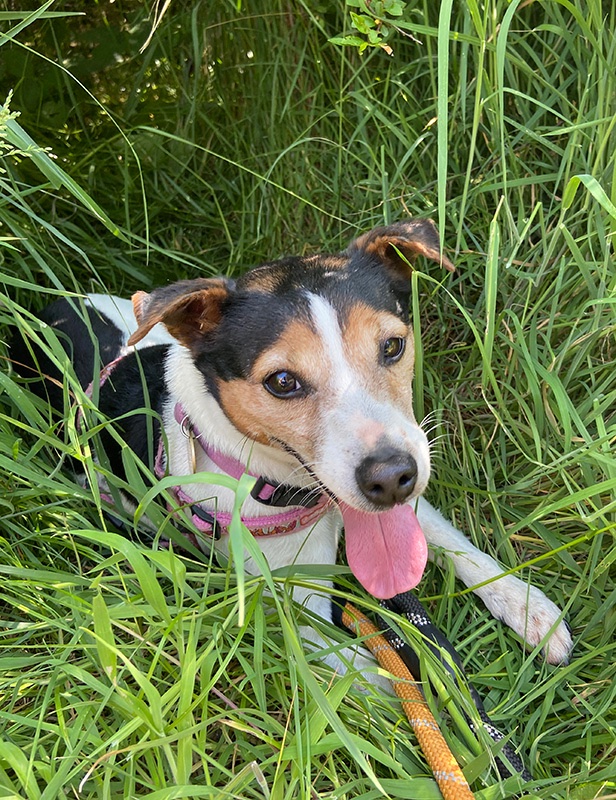